- December 14, 2012
While waiting for the bus to come pick me up to Halong Bay at Aurora Hotel in Hanoi, I got suckered in by one of the hotel staff to sign up for a 1 night 2 days tour with all meals included for $60 instead of doing it on my own. It sounded a pretty good deal to me for that price so I jumped on it. It would also save me the hassle running around trying to ask for directions which may cost me more money in the end. Plus as a solo traveler like myself, an organized tour would give me a chance to meet new people from different parts of the world a bit easier

It was a 4 hour ride to Halong Bay harbor where we would get assign to which junk (that's what they referred to as the boat) we would spent the next two days on. It was already lunch time when we got on the junk, that is when I met three 18 year old kids from England, Beverly and Andrea from San Diego, Simon and May from Vancouver, Alex from Melbourne Australia, and Rob from Canada just north of Minnesota. When you are on a boat in the middle of an ocean you don't really have a choice but to socialize and hope that you would get along with everyone. Since everyone have been traveling for at least a month and a half or more on their own it wasn't a problem starting conversations at all. For travelers, you basically just ask each other the same questions over and over again; Where are you from?, Where are you going after this?, How long have you been traveling for? Why?, What did you do back home?....etc. I should also add that alcohol and karaoke speed up the bonding process quite well too.

We spend Thursday night on the junk singing Karaoke, chatting about US politics, different languages, work, travel stories, debating if we should go skinny dipping in complete darkness at midnight, and how American football shouldn't be called football...etc.

We only met each other Thursday morning but it feels like we have known one another for weeks. We would go on to spent Friday together exploring Cat Ba Island on a rental scooter, afternoon coffee, and out to a couple bars at night. When the night is over, we say our goodbyes and wish each other a safe journey. We all know that after tonight we may never see each other again. We did, however, exchange email contacts so maybe we will keep in touch and there is always Facebook. But still sucks seeing everyone going their separate ways again. 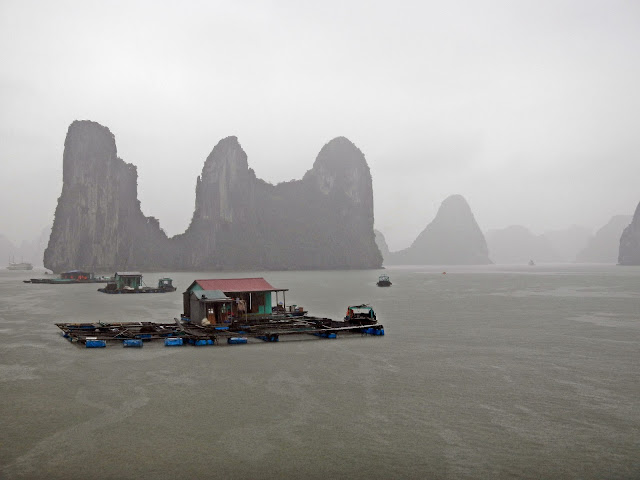 Halong Bay. Scattered showers through out the day. Still amazing. 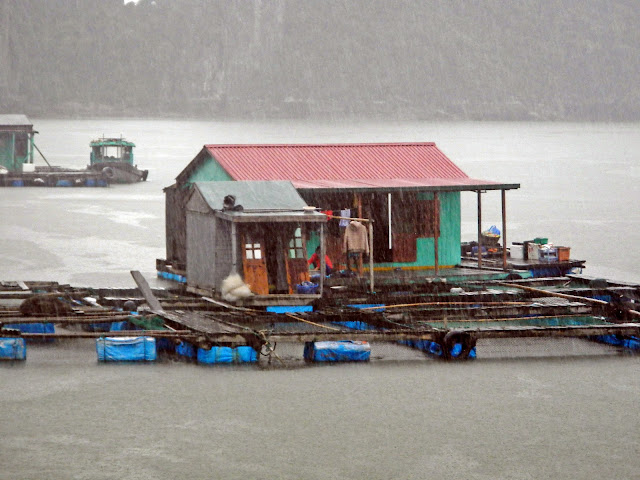 I think she was doing laundry. 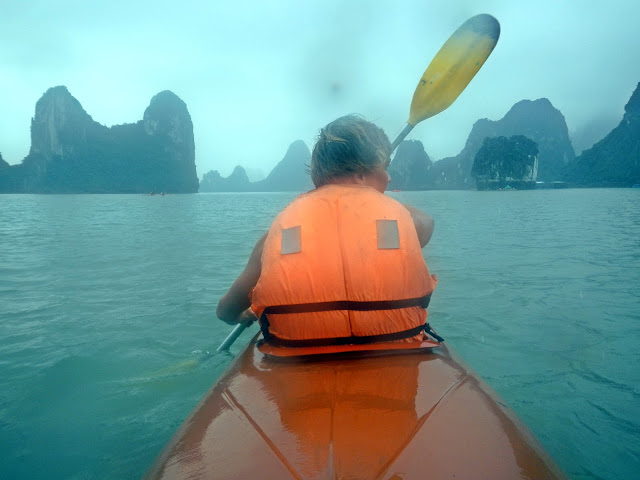 Tom and I partnered up. 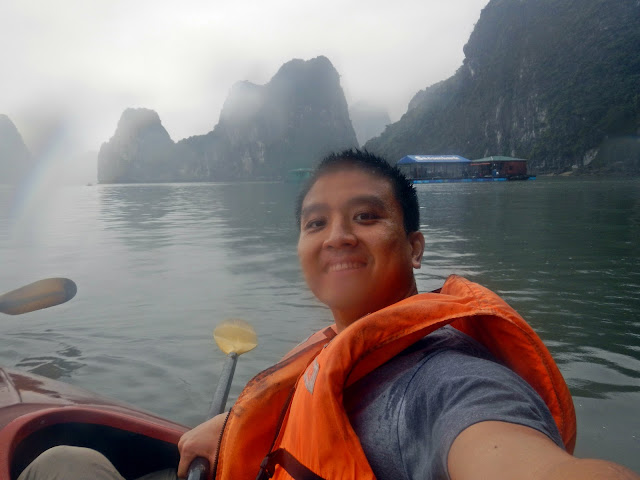 a little wet from the rain. 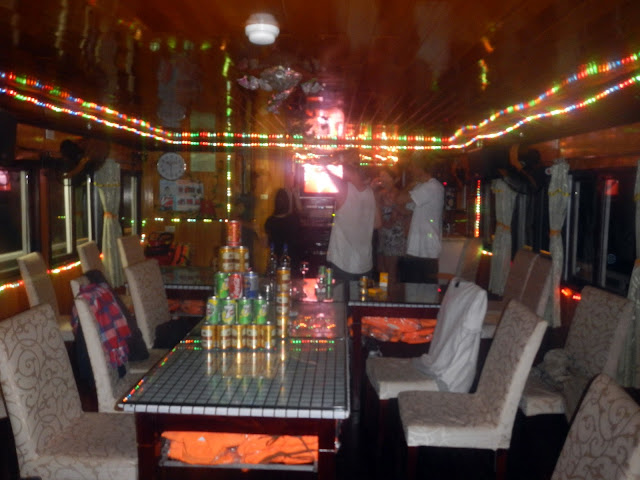 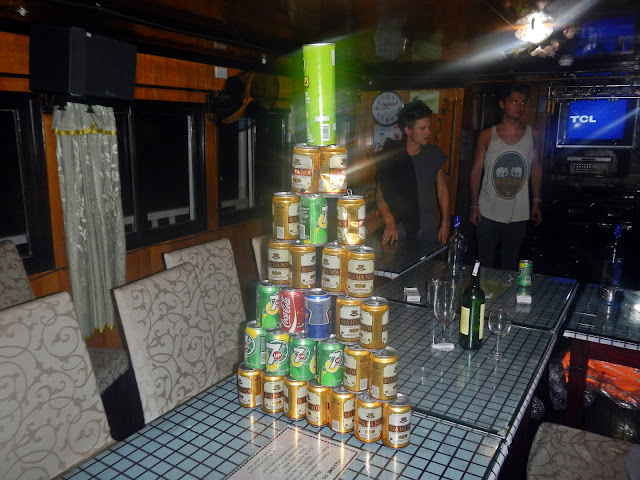 They drank a lot. I had a couple of Bai Ha Noi beers for $1.20. Prinkles is kinda a big deal here. 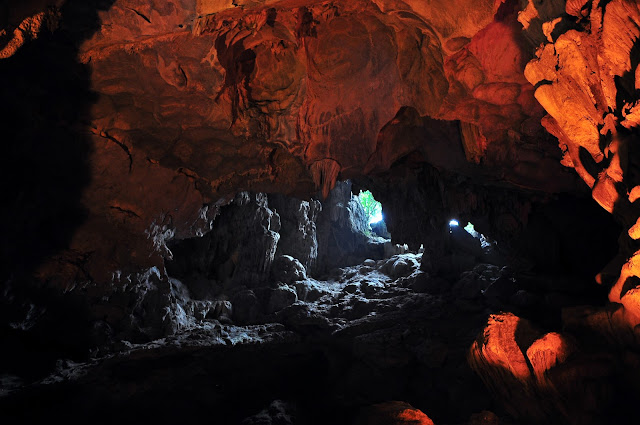 One of the caves in Halong Bay. 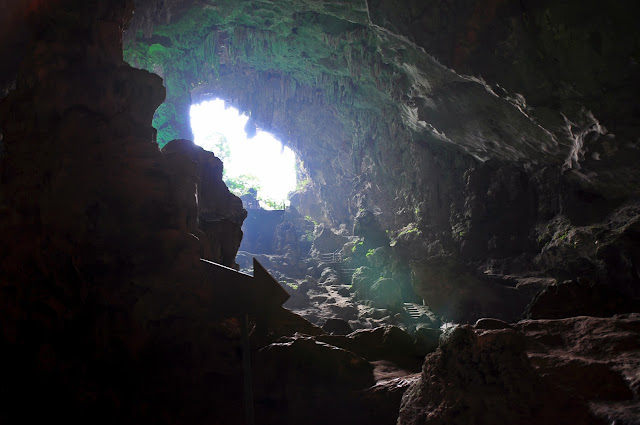 Second cave. This one is cooler. 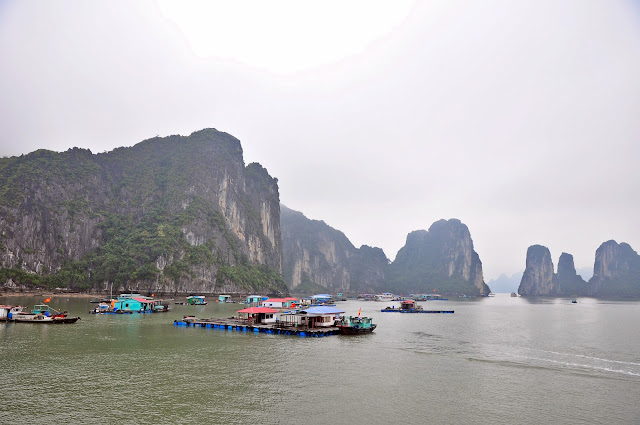 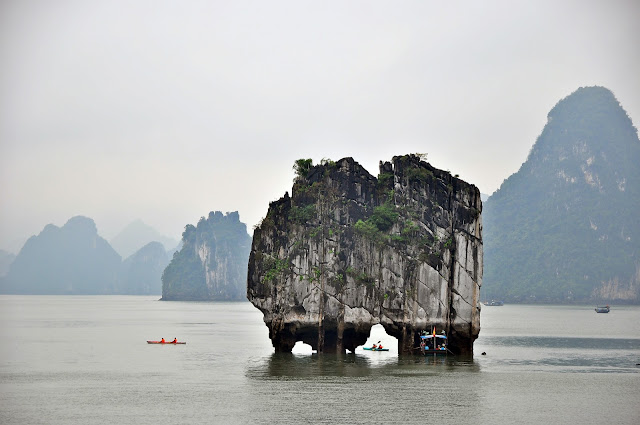 This one was cool. 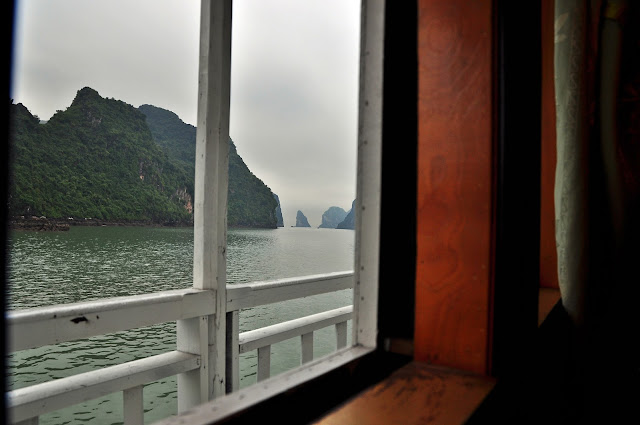 View from my bed. Pretty sure there were rats on the boat. 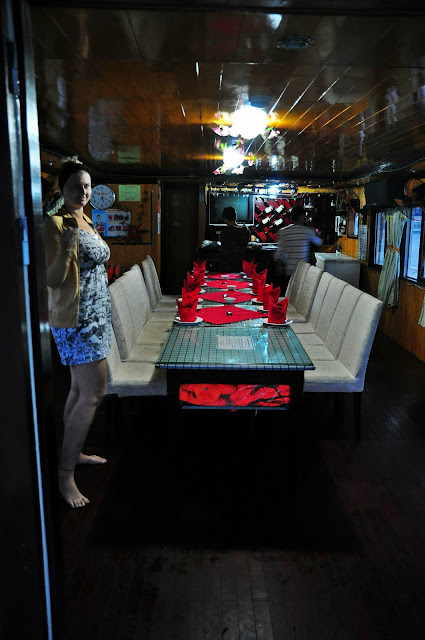 Ready for dinner. Food was meh. 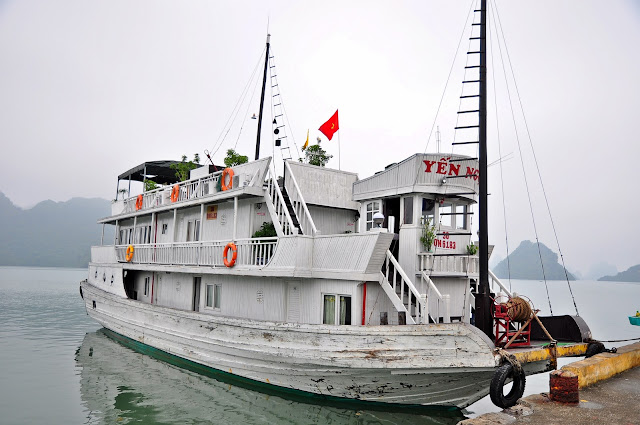 This was our boat. It looks nothing like what they showed us on the brochure when they tried to sell us the tickets. Oh Vietnam. Our room was on the second deck. 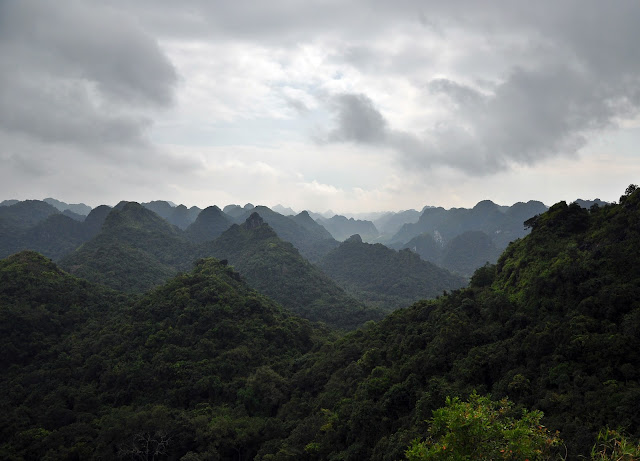 Hiked up to one of the summit in Cat Ba national park. 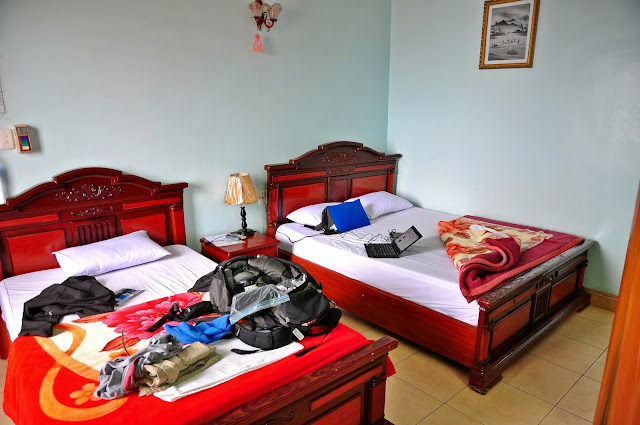 I got myself a private hotel room last night for $10. Going back to the door room style tonight to save money. Found one for $3 a night. YYYEEEE BOOIII!!!! 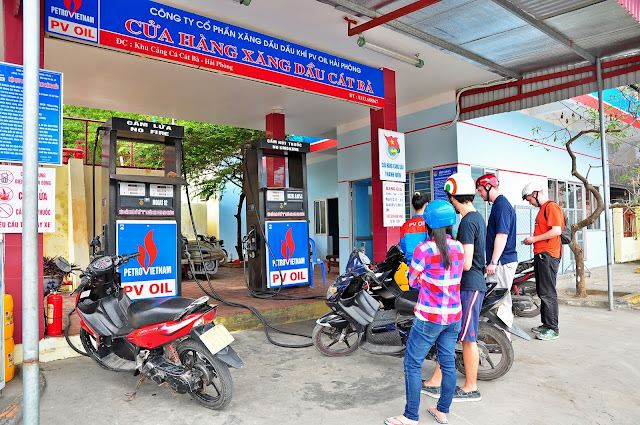 Rented a scooter for $3. Rode around the island for 3 hours. Good times. They would give you the scooter empty every time and you would have to go get gas. Whatever gas you have left over, they would take the gas out and put it in their own scooter afterwards. Pretty tricky. 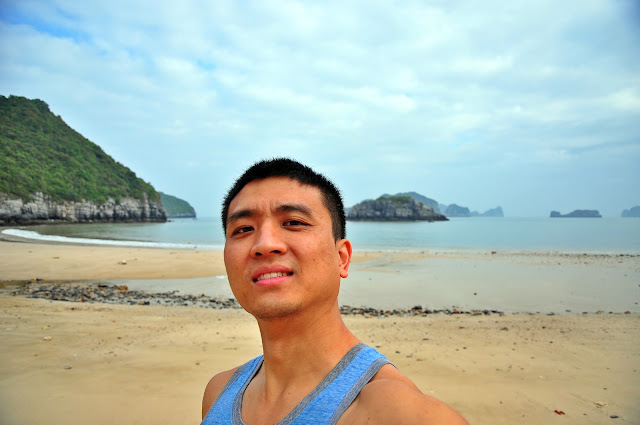 One of the 3 beaches on Cat Ba Island. 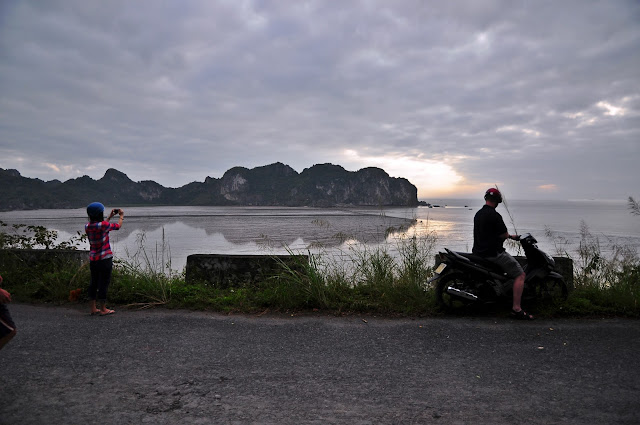 Rode through the coastline around the island. Rob on the scooter and May taking a picture with her photo device. 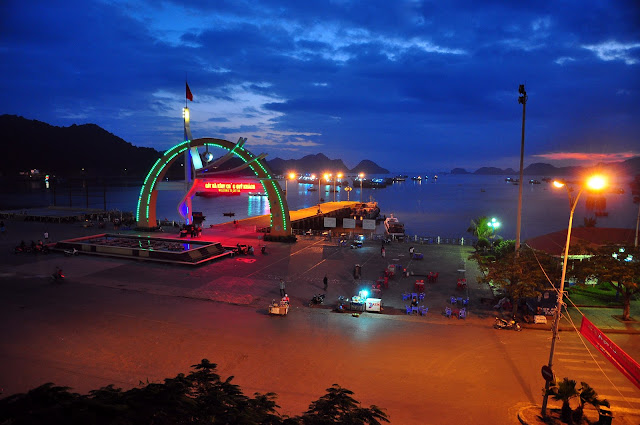 Balcony view from my room. 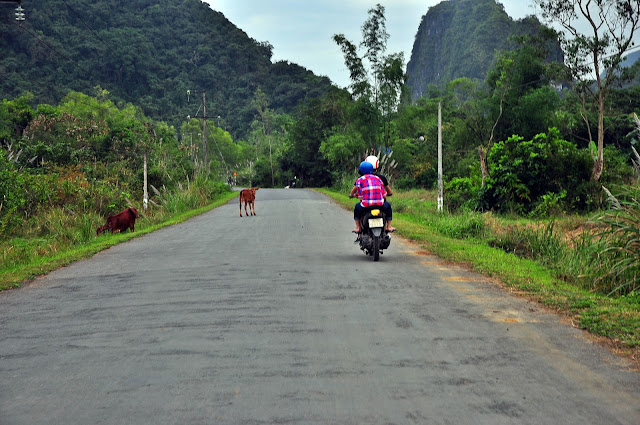 A cow on the road. Got up to about 40 mph on this stretch of the road. Pretty exciting. 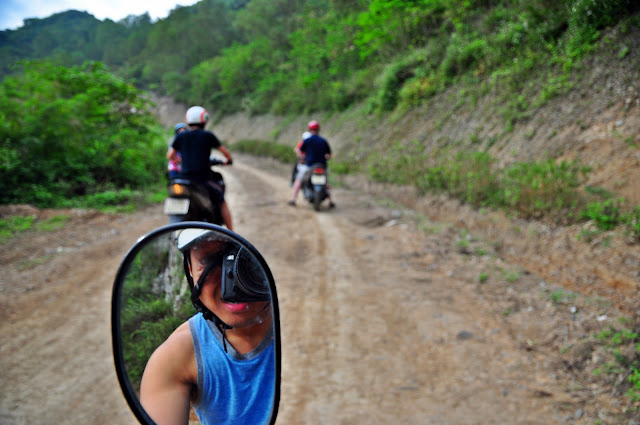 Riding on a dirt road with some construction going on ahead.

My roommates from San Diego for the night.