- October 29, 2013
I was kinda hesitant hitch hiking in South Korea just because bus tickets is fairly cheap and it's a small country. I've hitchhiked once back in the states and a few times when I was in Australia. Those were pretty easy since they are english spoken countries. Australia was super easy since there were so many backpackers traveling and most locals are pretty open minded and kind about picking up hitchhikers.

We have talked to other backpackers in South Korea about their experience and they all said it's really easy  and people are really friendly. So we decided to give it a try. =) We were open to either going down towards the south and then east or east and then south. Its a normal ride of maybe 4ish hours by bus, so not really so far. We said our goodbyes to Adam our host, and left bright and early around 9am and had to take an hour or so public transport/walking to get sufficiently out of the city.

We wrote the city name, Busan, in Korean. Headed to the nearest service station that is closest to the highway and put our thumbs out. We waited probably 10 minutes. Everyone looked at the sign but no one stopped. Then the gas attendant suggest we write on the bottom "USA America" just so they don't think we are Koreans. It only took 5 minutes after that for a car to stop.  We got picked up by this lovely husband and wife that did not speak any english and we do not speak any Korean except two words: an-nyeong-ha-se-yo (Hello) and gam-sa-hap-ni-da (Thank you).

After going back and forth and some hand gestures of blah blah blah blah blah, we decided to just hop in and see where the wind will take us. We did kind of have an idea that they may drop us off somewhere that is 1 hour away from our destination. So we got in!

The ride was super nice.. the husband was an excellent driver. The countryside and mountains we passed by were absolutely beautiful. Halfway through, we stopped at a service station at Sancheong where we were able to find a translator. The translator did confirm that the couple weren't driving to Busan, but back to their home, which was an island in the south. He then suggested (to them and to us) that we should be dropped off at a bus station in Tongyeong, a coastal town 1.5 hours away from Busan and on the way for the couple. While we tried to say, "No buses and No trains, we want to hitchhike", he didn't seem to listen and insisted that it was "very dangerous! There are bad people out there! Not everyone is nice like this husband and wife .. etc". Then he went on to translate and ask if we'd eaten breakfast or lunch yet (ah Korean hospitality!). We shook our heads and said we would eat later, but they kept insisting on buying us something at the service station, so we chose some sausage/rice cake sticks which turned out to be not bad.

So the whole journey took about 7 hours. 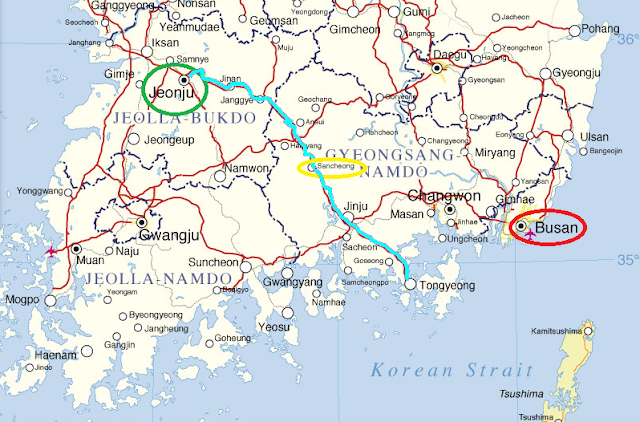 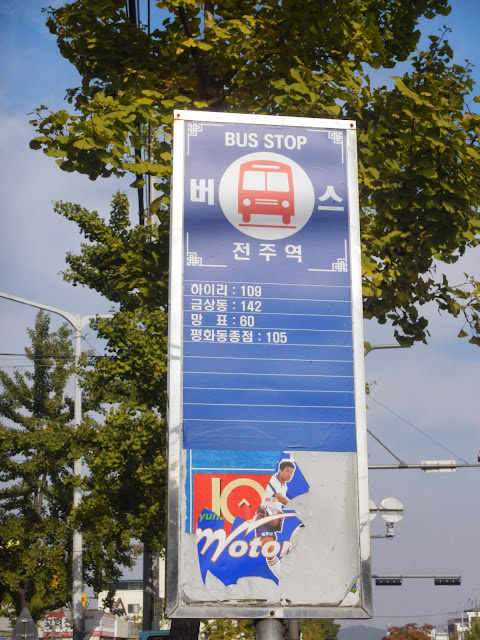 We had to transfer to bus #60 to get to the service station but it never came. Had to walk. ugh. 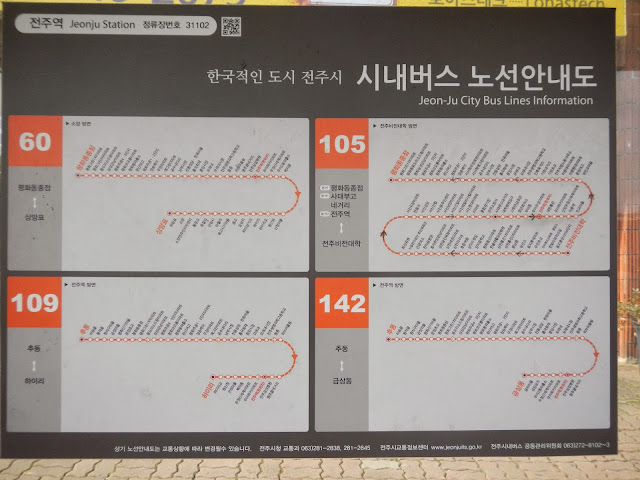 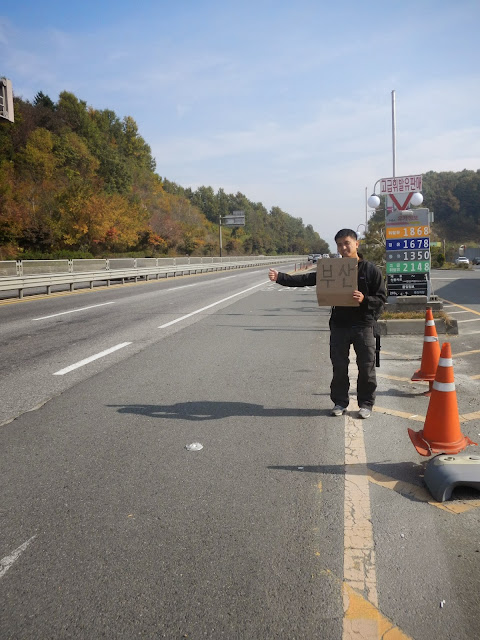 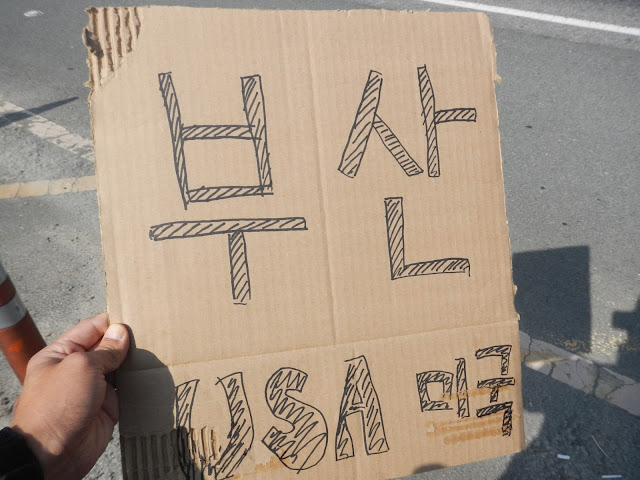 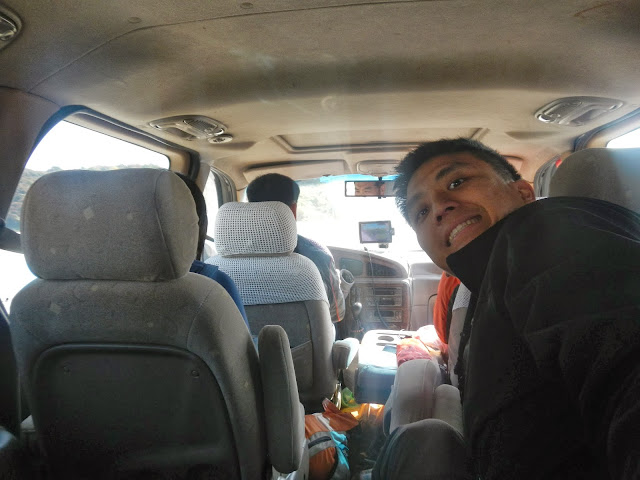 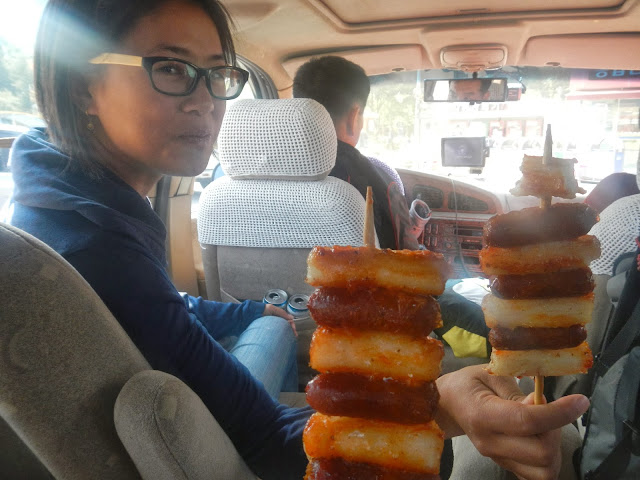 Food the lovely couple bought us. 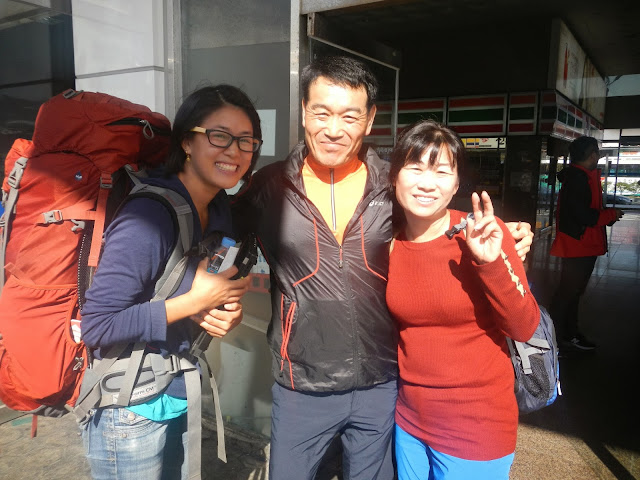 Oh lovely koreans. Took a picture at the bus terminal. 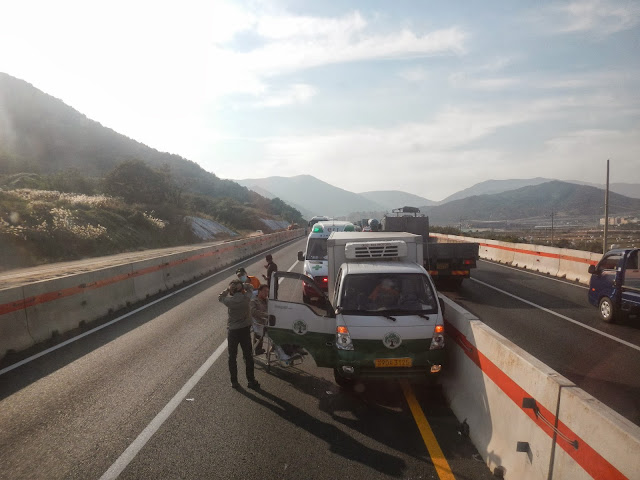 Bus got into an accident. It was pretty intense.