Hitchhiking from Fukuoka to Osaka.

- November 05, 2013
We left bright and early on the third day in Fukuoka at around 8am. Good thing we left early because we wasted about 1 1/2 hour heading back to the hostel we checked out the day before to try to find a really important plastic bag that Vanessa gave to take responsibility off. I locked it in our locker when we checked in but forgot to take it with us when we checked out. May I add the plastic bag have about $1000usd cash in it. Luckily, it was still in the locker. Phew.

After that, we headed back out towards the highway ramp to start putting up our signs. We had to wait 1 1/2 hour for our first ride. Surprisingly long considering everyone other hitchhikers we spoke with said it is so easy to hitchhike in Japan. Anyhow, we got picked up by Takashi (30 years old). He was so kind he picked us up twice. He waited for us for 20 minutes to see if we could get picked up after dropping us off at the first service area. 20 minutes later, he came back to us and said he will drive us a little further to the next service area. He was super nice. He also bought us two boxes of cookies. One of us and one for the next drive who picked us up. Unbelievable. I asked later why did he picked us up (we were his first hitchhikers) and he said he just wanted to practice his english.

Taking the bullet train would only be a little over 3 hours. Hitchhike took us about 2 full days but we did save $500 on the rail pass each person. 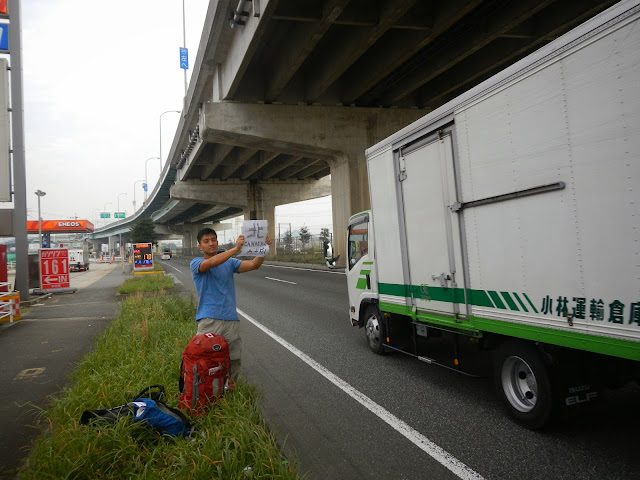 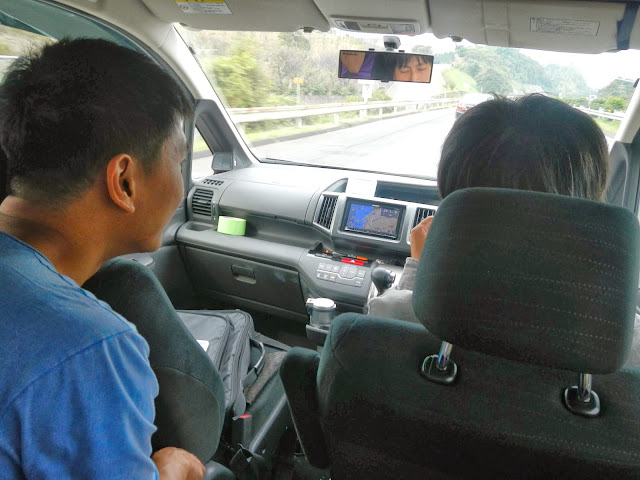 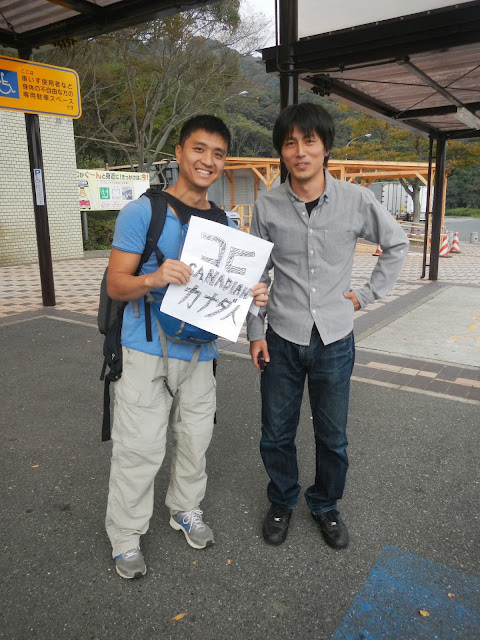 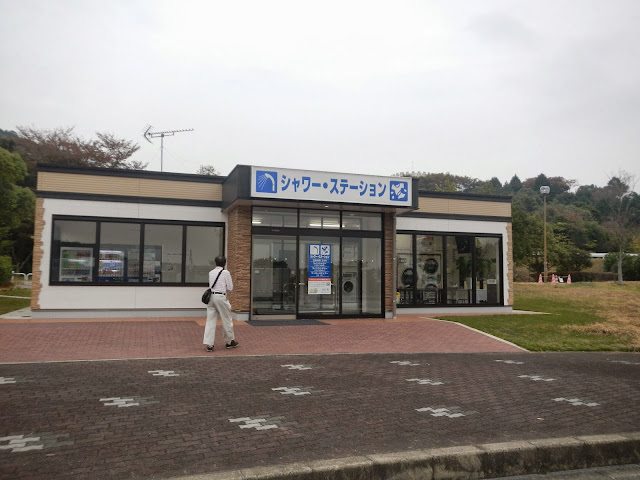 He was right. Second service area was a lot easier. 10 minutes later, another person picked us up (forgot his name). He didn't even speak a word of english. All we know is he was heading to Hiroshima and so were we. The best was since he didn't speak any english and we couldn't speak any Japanese, we had a whole conversation throughout the 2 hour ride through a translation app on his phone. Pretty funny and it worked pretty well. Video below. We know he is really good in bowling. He said the best score he has ever gotten was a 299!!!! That's pro level right there. 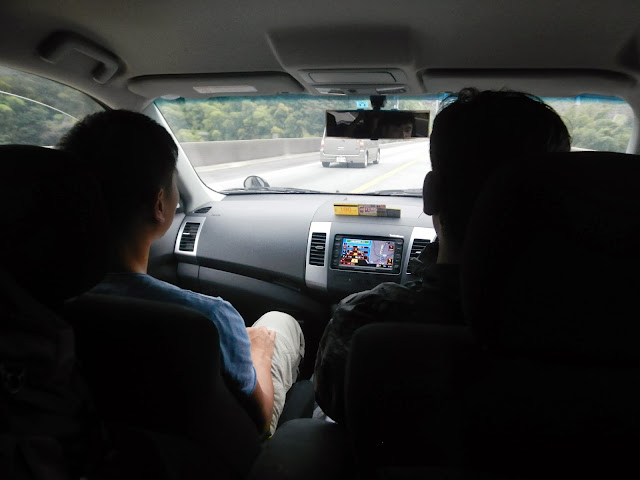 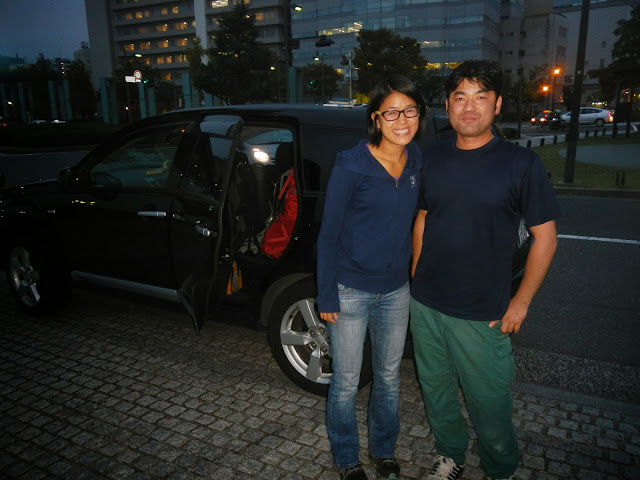 Guy we talked to through translation app. good times.

It was already around 6pm when the second driver dropped us off in front of the A-bomb site in Hiroshima. We weren't sure where to stay yet. We decided to walk around and grab something to eat for dinner. We were going to stay at a capsule hotel but the one we went to was for guys only. Instead we went to an internet cafe which opens 24/7. Better than nothing. $30pp and get to use the internet. 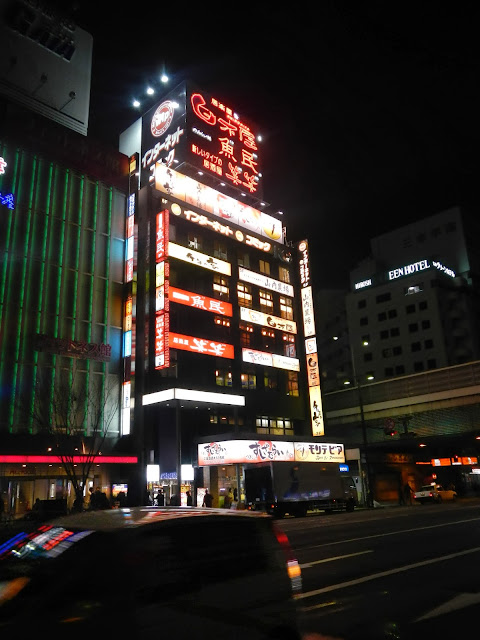 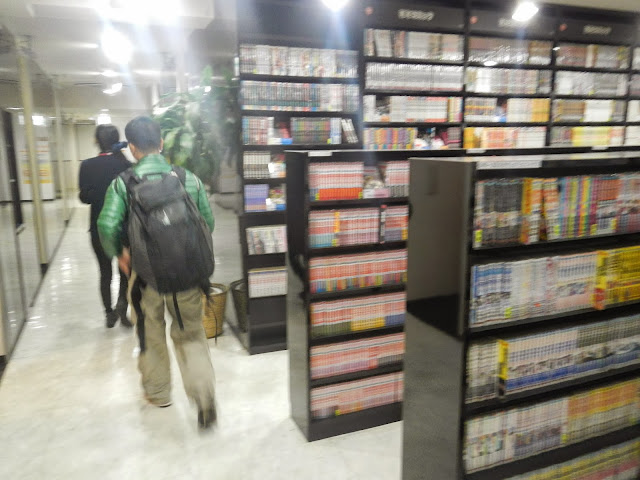 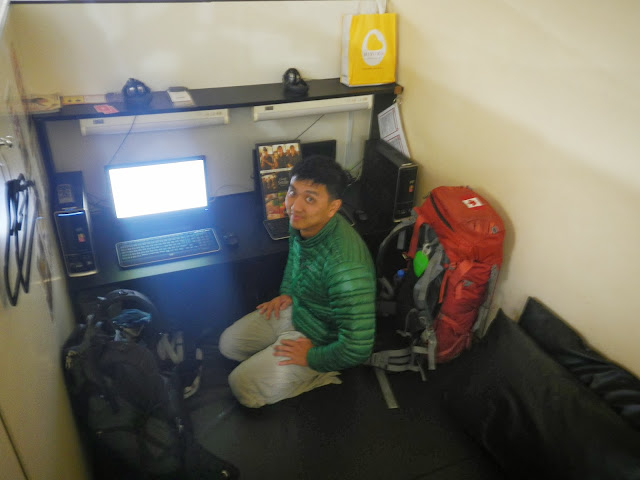 We cont. our journey the next day. Unfortunately, it was cloudy and rainy so it made hitchhiking not so fun. We thought it would be easier just because people might feel bad for us so they may pick us up but NOPE. The first 4 rides was fine. The longest we had to wait was maybe an hour and 15 minutes. But when we got to our last service area stop around 5:30ish which was already dark and pouring rain. We were there for 3 hours and not a single car would pick us up. We saw their license plate are from the town we are heading to (we had a sign) but no luck. Until Vanessa had to ask someone and he agreed to take us.

He was going to drop us off at the next service station but he changed his mind and decided to take us to Osaka instead. Which was not our destination but we had no choice at that point. It was a good idea anyway. Kyoto was only a 30 minute train ride from Osaka. So we stayed at another internet cafe again. 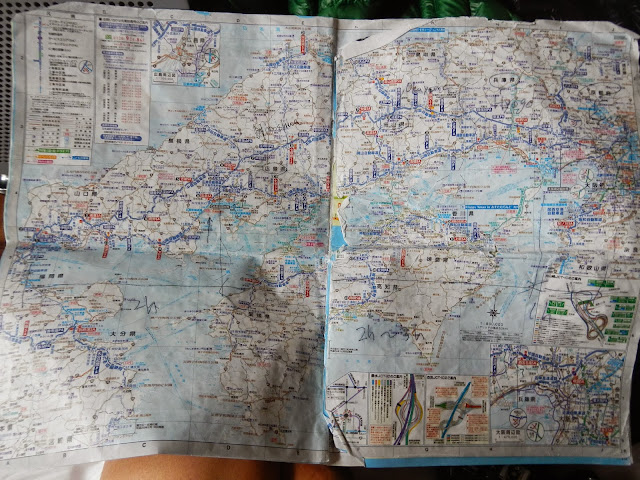 The map we used to have drivers show us where they are going and drop us off. 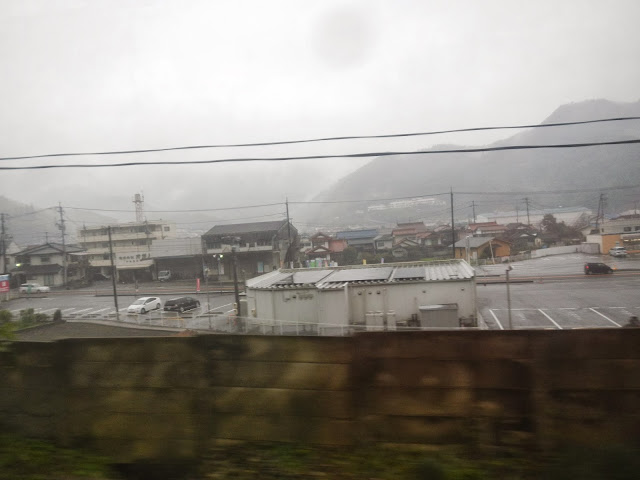 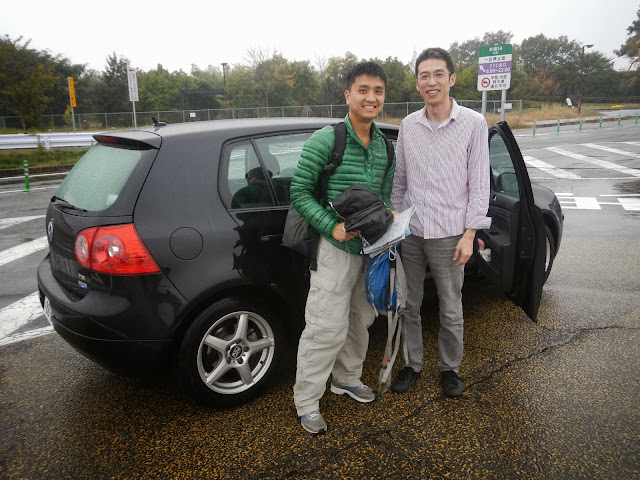 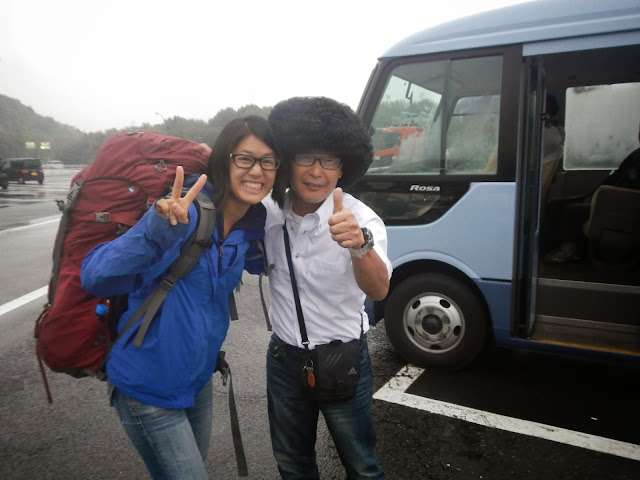 Second ride. a bunch of old japanese men picked us up in a van. No idea why this guy have an afro on. 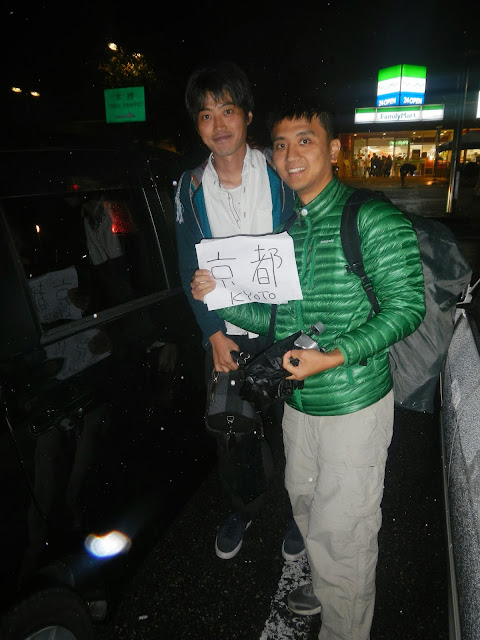 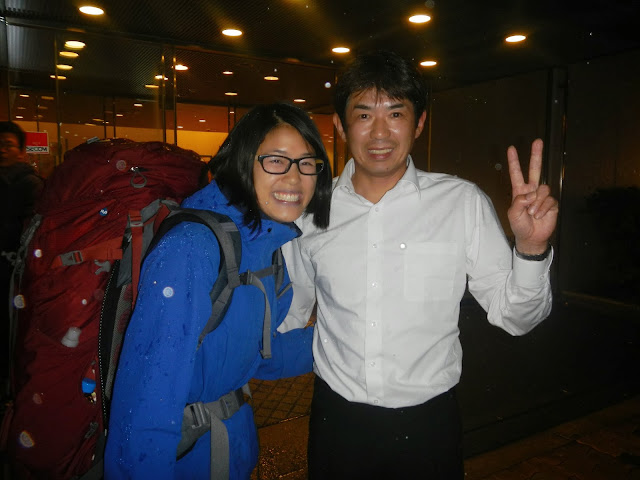 4th and final pick up. Work for nissan import export. Driving a Nissan Leaf electric car. I love it. 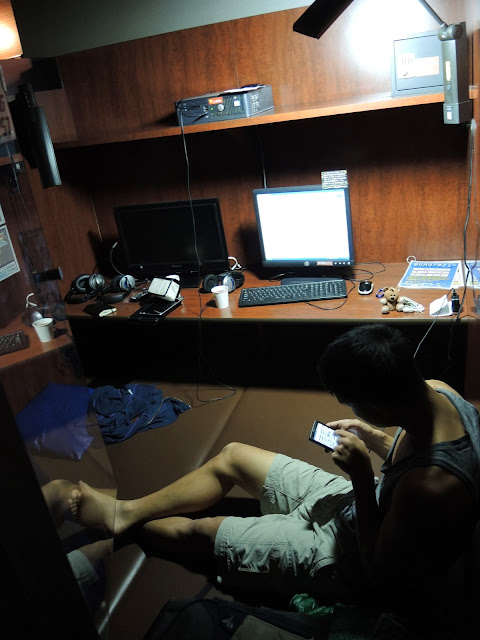 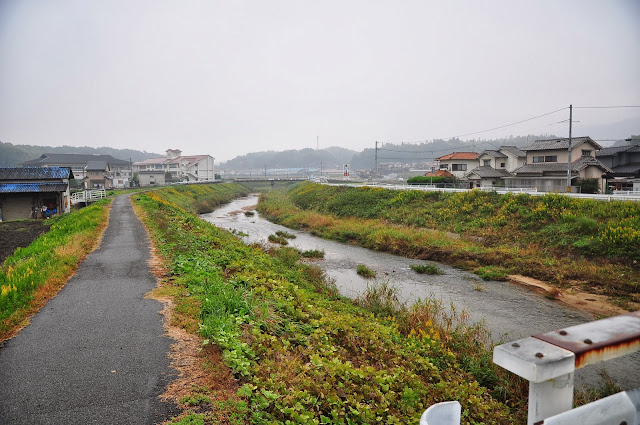 Pictures are out of order but we had to walk 1.9km through this village to get to the service station on the highway on our second day. Really pretty. 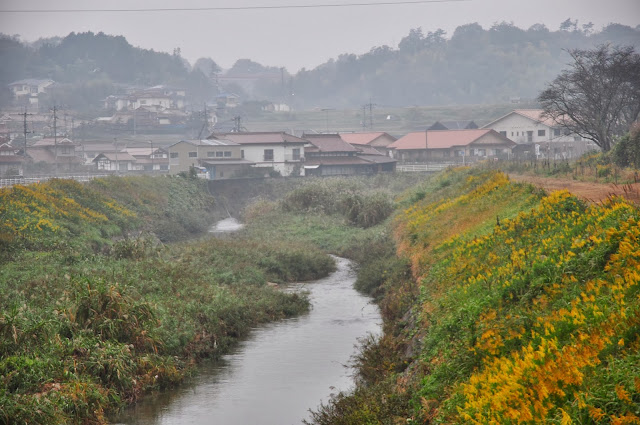 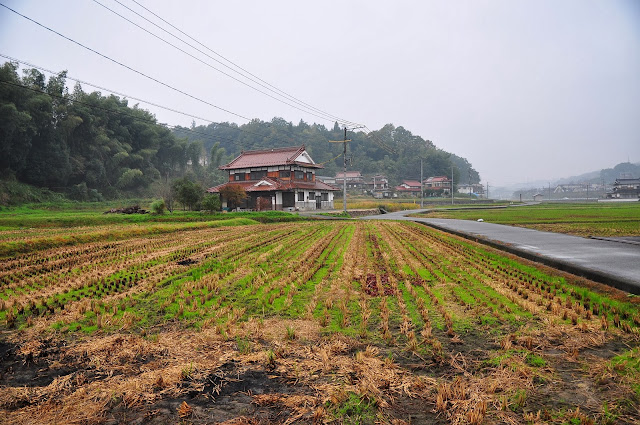 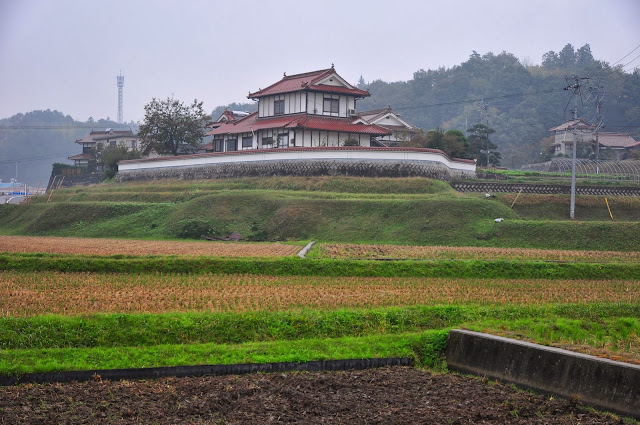 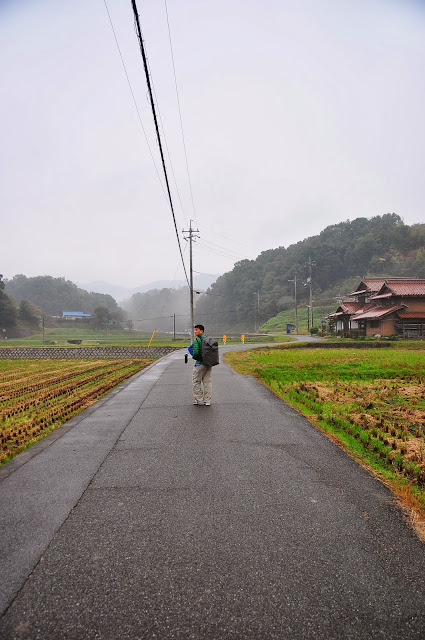 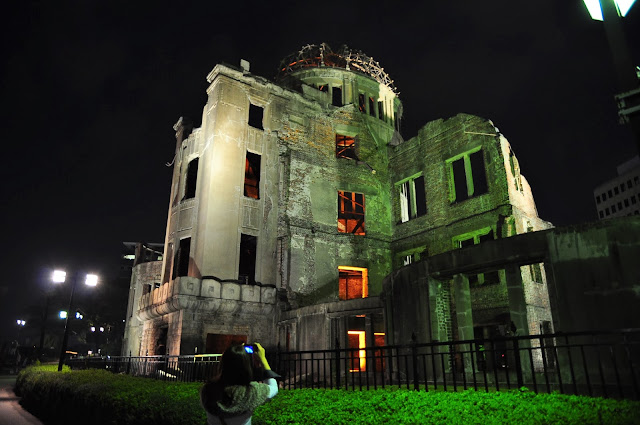 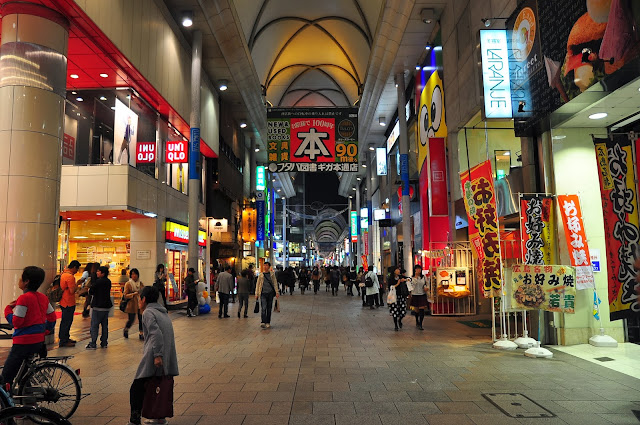 May I add all of the people that picked us up were their first time picking up hitchhikers. Reasons range from wanting to practice their english, wanted some company, or just being plain nice and wanted to give it a shot. Once we get in their car, they took full responsibility for us. Bought us food, made sure we get to our next place alright or even rides, helped us find hotels to stay. They are incredibly kind to us.