Backpacking Budget (Part 3 of 3): Australia in a campervan

- April 19, 2014
Australia has a pretty good reputation of being one of the most expensive countries in the world. If you are a backpacker then you are very likely to have a working holiday visa hoping to find a job in the hospitality industry or work your butt of picking fruits. It would be extremely hard to travel and live in Australia without a job unless you had a pretty good amount of savings.

The cheapest and most popular way to travel in the country is to purchase a campervan, which is what Vanessa and I did. We bought the van in mid may of 2013 for $3,650 AUD and moved in on the 1st of June. We decided to record everything from petrol, food, vehicle maintenance, entertainment, etc on separate spreadsheets in order to make sure she and I can keep our monthly budget as low as possible. Below are the different purchases we have kept track of our 3 month campervan life traveling through the east coast from Nowra up to Port Douglas.

* Sorry if the photos are too small. Click to enlarge.

The spreadsheet above is for petrol (Gas for North Americans). We kept track of the town/city we filled up at, the date, the price per liter in AUD, whom it was paid by, the milage when we filled up, how many KM we have driven between each fill up, and the average KM per liter we have driven for each tank fill up. The yellow highlight is the total amount each of us spent on petrol for the entire time. We sold the van at the end of August and the first 3 days of September, we rented a Juicy van for $1 per day (It was that cheap because we helped relocate the van for the company) to drive back down to Brisbane from Cairns in order to fly out of the country. 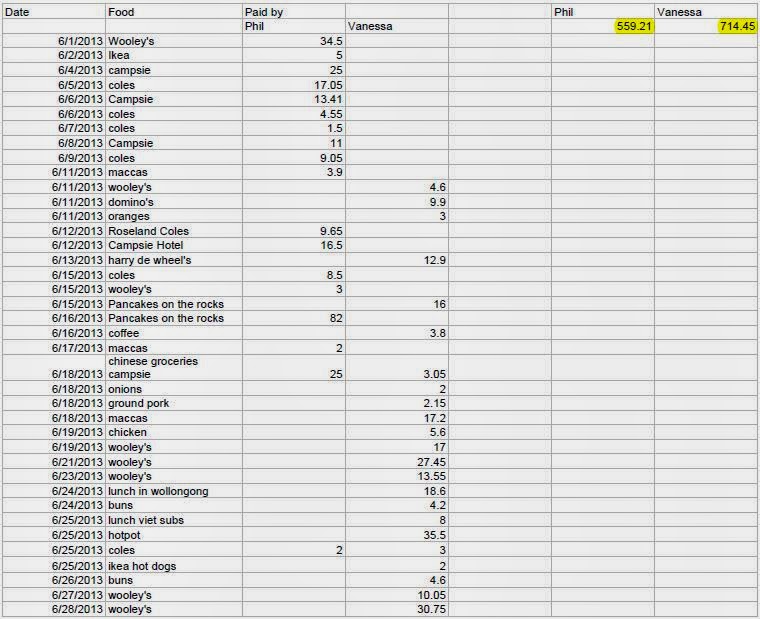 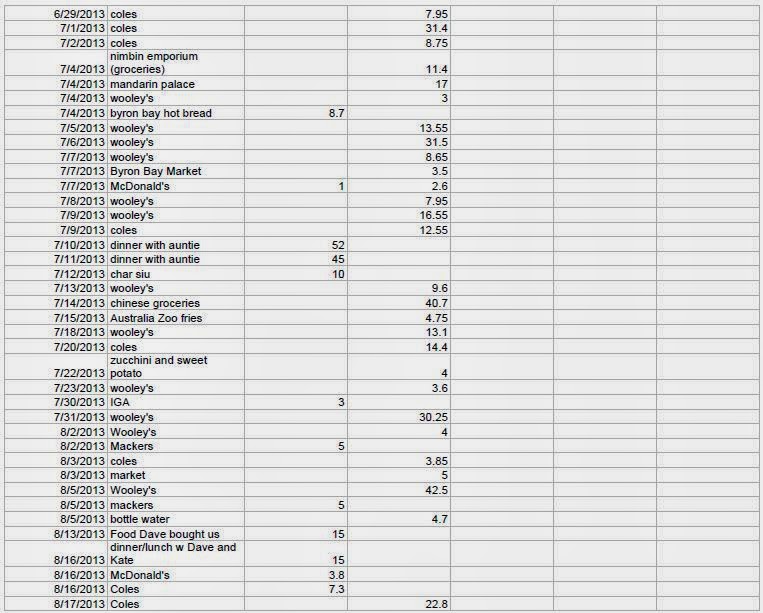 Above is our food purchase. We went out to eat only a hand full of times the whole 3 months we have lived in the van since going out to eat was just way too costly. When we do go out to eat, it would only be on special Wednesdays. Most restaurants would have some kind of deals every Wednesday. Vanessa is a superstar at food shopping, she would only purchase most food items that are on sale especially when it comes to meat. We would end up eating more vegetables anyway, since it was cheap, which wasn't a bad thing.  Rice, pasta, and bread were our life savers. Again, I'm not a big drinker to begin with. I did have a few beers and wine here and there, but definitely not every week. 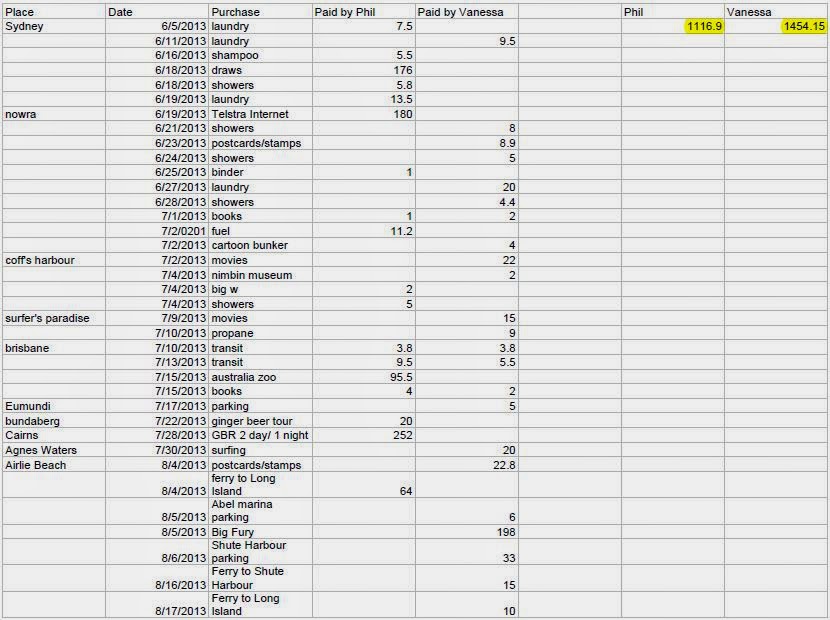 Above is our miscellaneous cost sheet from showers (gyms/ aquatic centers/ public showers. We started using the free public beach showers once we headed more north with warmer weather. Only cold water. Hostels would sometimes let you shower for free if you ask or you could just sneak in.), laundry, parking, tours...etc. I would say that we were a little frugal on joining prepackaged tours (which Oz has many of.. to Fraser Island, Uluru, outback adventures, etc), preferring to do things on our own, or find free entertainment like the free shows at festivals. This really saved us a bundle as well, but may not be the way that some people like to travel. 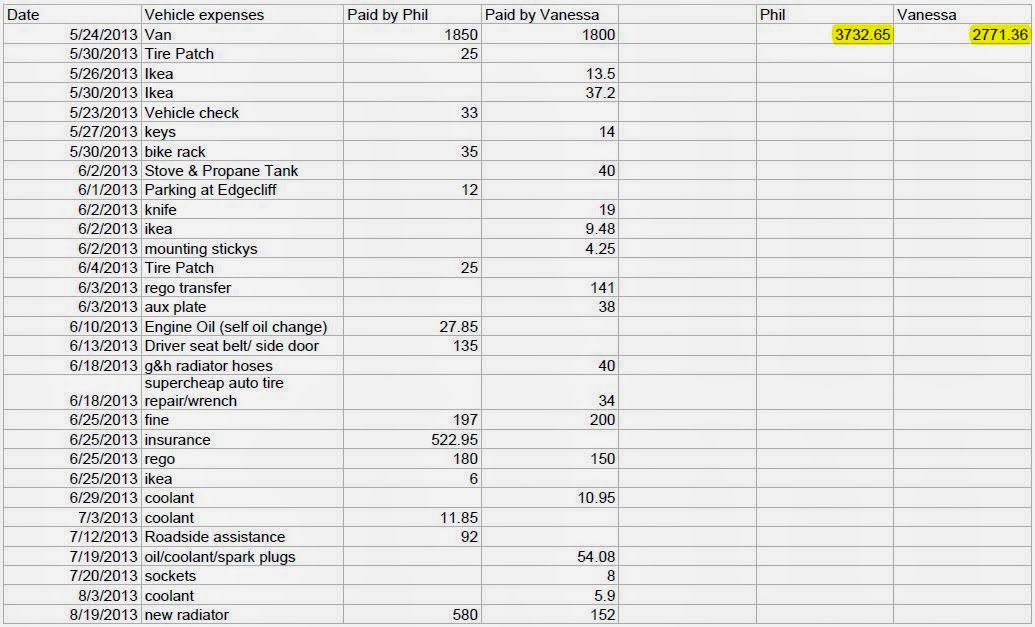 Vehicle maintenance is probably the scariest thing during the whole trip just because we never know what could go wrong from purchasing an old van with 300,000km on it. I have heard a few horrible stories where an engine completely died and the owner had to spend a few thousand dollars to replace it. In some cases, that's more than what they bought the van for. Luckily, the biggest cost we had to endure was a $700 radiator replacement and other small fixes.

And finally, this is the summary of our total cost by weeks. By the end of all this, we both have spent roughly $11,754 from when we purchased the van to when we sold it. We sold the van for $4300 ($650 more than we purchased it). So minus the $4,300 from $11,754, Vanessa and I spent a total of $7,454 in 3 months traveling Australia. We also spent two and a half weeks working in exchange for accommodation and meals which saved us quite a bit of money.

If I were to divide $7,454 by two just to see how much I spent in 3 months, it would average out to be a little over $1,200 per month. I am pretty happy with that result since in the previous post, I mentioned I wanted to keep my monthly budget at around $1,000 per month. And given it is Australia, I think we did pretty good.