- January 31, 2018
Norway was one of those places that we had never really thought about going to, especially not in the middle of the winter. Be that as it may, the combination of the timing of our trip, and the presence of a school friend who would be visiting home in Volda, Norway, meant a trip there in February became a reality. So we booked a two week trip to Norway, half of which we would spend in and around Volda, and the second half where we would spend in the slightly larger city of Bergen. 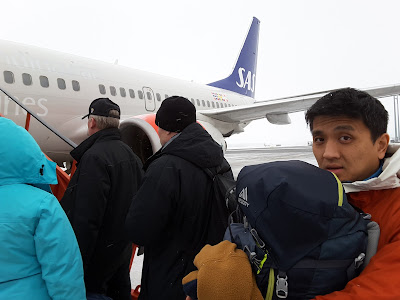 We flew in from rainy London to Oslo, where we were met with the frigid view of a white blanket of snow draping across the landscape like frosting on a cake. While not unexpected, we had after all, made the effort of purchasing a few warmer inner and outer layers prior to coming on this trip, it was still a sight that made us dread heading off the plane. We could only imagine what lay in store for us at our final destination, Alesund, a small town on the west coast even further north than Oslo. However, as we flew over on our connecting flight, we were pleasantly surprised when we got closer to the rugged mountainous coastline of Western Norway. Other than the tops of the mountains, the lowlands were devoid of snow, and upon landing and leaving the aircraft, the temperature outside was surprisingly warm. 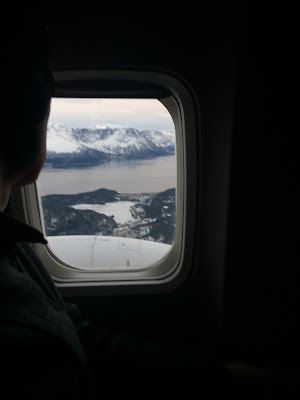 Our friends greeted us at the airport with quick hugs, and then a hurried “come on,” as they shepherded us to the car outside. We had no idea what the hurry could be in this sleepy, quiet town, but as it turned out, hurrying to catch the ferry was going to be a quickly repeated experience in Norway.

Living with a combination of mountains and fjords meant that if you weren’t going through a tunnel that cut through the middle of a mountain, or went underneath a fjord, you were driving alongside the lengthy coastlines of the fjords and catching ferries across. Having constantly popping eardrums was a common occurrence. 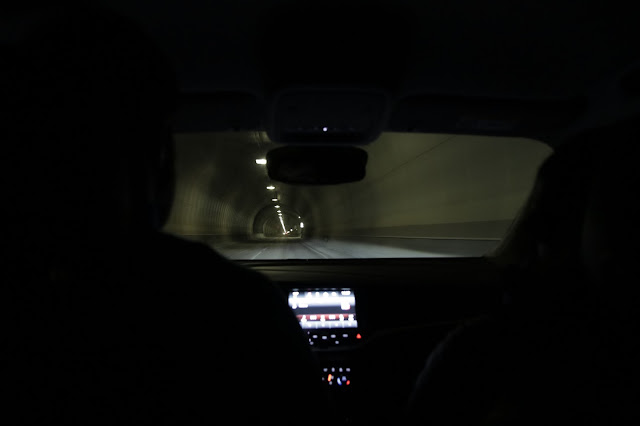 We drove as fast as we could to the ferry, but as luck would have it, we got caught in traffic, or should I say “traffic”. Coming from living in the bay area for the past 3 years, I would say we’ve had our fair share of traffic, so it was quite a funny thing to see approximately 20 cars in a line, all politely waiting in the right lane, leaving the left lane completely clear. Apparently, Norwegian thinking was that left lane would end soon anyway, so there was no point in trying to pass anyone by taking the left lane after all. In the end the "traffic jam” really only lasted about 5 minutes, and we were quickly on our way. Unfortunately we did miss the ferry after all, but it was only another 15 minute wait, where we got a chance to stop by a little shop to have a quick bite before getting on the ferry.

Our friend’s family lived up on a hillside in Volda, in a beautiful wooden house that exuded warmth and elicited nostalgic memories of my Canadian childhood. We were lucky it was a relatively clear day that welcomed us on our first day in Norway. The view from our guest room was an amazing vista of the small town spreading to the edges of the fjord, and the majestic mountain across from us. 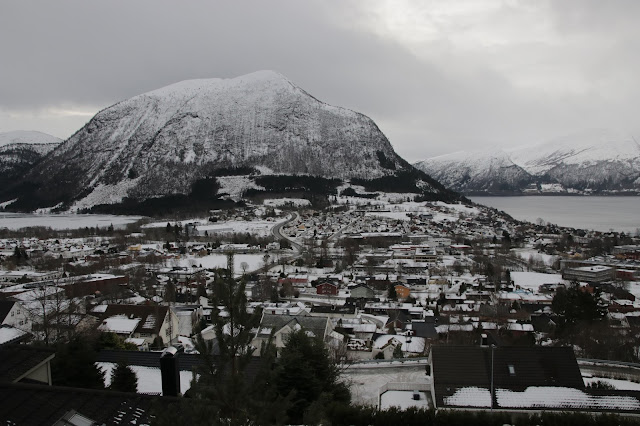 Daylight was already waning by the time we arrived. At this time of year, daylight lasts only from around 9:30am to 3:30pm. The darkness that soon enveloped us made the wood fire stove and warm dinner all the more cozy. 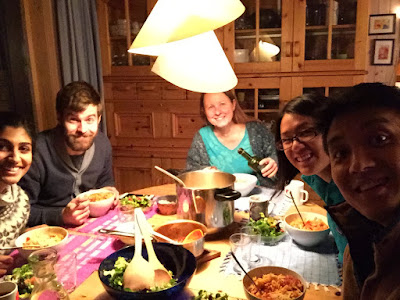 Not a bad start to our trip.