- February 27, 2018
A few weeks ago, we found ourselves driving through the countryside of France. After landing in Calais, we drove immediately to Paris. I’ve always wanted to go to Paris, every since a childhood friend had gone and returned with a souvenir Eiffel Tower keychain for me. I’m pretty sure it’s one of those places that’s been so romantacized in my mind from all the movies and music, etc, etc that I could expect nothing less. For example, one of my favorite movies is Moulin Rouge, a movie about love set in the most romantic city in the world, and a musical to boot. So it may have been the cold February weather, but Paris didn’t end up giving me that warm “Parisian” air that I think I always expected.


Rather than deal with the infamously crazy Parisian traffic, we opted to park our car at the train station of the nearby town of Creil, and take the train into the city center. There, we rented an airbnb for one night located right next to the Eiffel Tower. While the airbnb location was phenomenal, the airbnb itself was only ok. Not entirely sure if this was a place that represented a typical Parisian apartment, it was a tiny studio, with a bed, a makeshift kitchen (electric hot plates, a sink and a toaster oven), and a bathroom. While the owner clearly made the most of it with a pretty decent array of kitchenware, modern décor and matching colors, the mold on the walls and somewhat grungy red carpet dulled the effect. In any case, we did enjoy taking the tiny elevator (literally the width of our shoulders and only deep enough to fit 2 people with small backpacks) up and down to get to the flat.


The next day, we made it out to see the Arc de Triomphe, the Notre Dame Cathedral, have lunch at a small french restaurant (Phil accidently over ordered by a crazy amount and then realized they don’t do take out for leftovers), and find out that of all days, the Louvre is closed on Tuesdays (*sigh). We ended up walking around the Carrousel de Louvre for an hour or so and then headed back to the train station to get back to Creil.


We spent that evening checking out the Eiffel Tower (Phil was not impressed), finding a grocery store to make dinner back at the airbnb, and then making use of the internet while we could.

Day 3, we stayed overnight in the small town of Saint-Leu-d'Esserent. It was conveniently located near a bakery and the touristy Chateau de Chantilly, where we drove by in the morning. I’m not sure what it was, but we saw both a guy getting a random passer by to take a photo of him posing naked from the waist up in the snow in front of the Chateau, and another guy who’d set up rings off of a nearby tree and was doing exercises.. again in the snow. What was going on? We have no idea.

We spent the afternoon getting groceries at Auchun (a Wal-mart like place), and then getting our oil changed at a nearby auto shop. This was a real test of my French proficiency, as the workers there did not speak English… and I found out how deficient my French really was, especially in the area of vehicular expertise. On the upside, I’ve learned that oil change in french is “vidange.” Now we’re pretty sure we got ripped off by these guys, and Phil’s convinced that they didn’t actually change all 3 filters (oil, gas, and air) that they said they would… but hey, the van definitely ran smoother once the oil was changed, so we continued on our way to Fontaineblue, the famous bouldering hive in France.

Our sleeping spot was nicely situated, being only a few miles from the bouldering area, so it was to no one’s surprise that 4 other vehicles (behemoths compared to our van) shared the same spot, and who also were climbers. Albeit, they were much more intense than us… most of them had been there for at least a week, if not more, waiting out the week of snow for better climbing conditions. It just so happened, the day we had decided to check it out, was the first sunny day in a while, so all these hard core climbers were pretty psyched. When we went to check it out though, the good 2 inch thick layer of snow on top of all the boulders with hidden ice underneath made us turn back pretty quick. Kudos to those guys for toughing it out.


We spent our time doing laundry, checking out the town as well as walking around the Chateau Fontainbleu. Pretty sweet spot!


At this point, we were pretty set on getting out of the cold, so we set our sights on getting Spain, coincidentally around the same time as a few of our German friends who were on a 10 day vacation. We stopped through on of France's most beautiful villages, La Roque Gageac, a village built on the side of a cliff next to a river. It was pretty spectacular, and absolutely empty. Perfect conditions. We stopped overnight at the small town of Labastide-d'Armagnac which had an interesting square that reminded us of something out of Beauty and the Beast. The increasing lack of snow was an incredibly welcome relief. 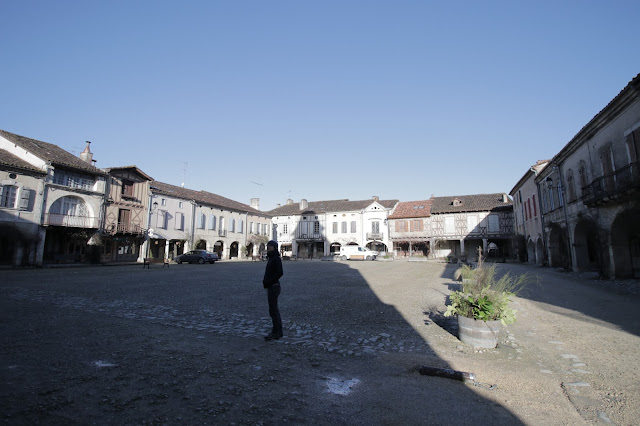 Then we were off towards San Sebastian, Spain!
France Vauxhall