All Roads Lead to Rome

- March 29, 2018
Our goal was to get to Rome relatively quickly, so we made a quick pitstop through Pisa, which Phil wasn't entirely impressed with ("It's just a tower, that's leaning." His words). The fact that it snowed the next morning meant we were ready to make this a really quick stop.


Next stop, Rome! This is a city that I've been to before, but for Phil, it was his first time. As Phil's a bit of a history buff, I knew this was a city he'd enjoy. Happily, we also found a great Park4Nite spot near the Borghese Museum Park that was free and quiet. We ended up staying a total of 3 nights and 2 days in this amazing city.

Our first day we spent wandering the city. We stopped at the Spanish steps (Phil didn't get what all the fuss was about), Trevi Fountain (way too crowded), the Piazza Venezia (Phil just wanted to know where Mussolini stood to give his speeches), and finally passed through the outer forum to reach the Colosseum. 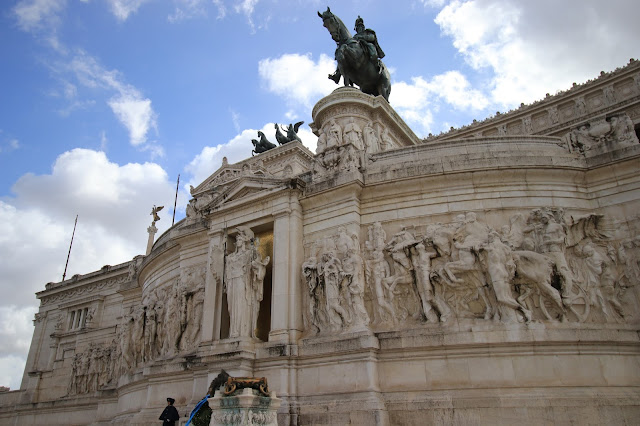 We were a bit worried not having pre booked tickets and such at the Colosseum, and expected a long long line up to get in, but lo and behold, it took us about 15 minutes to stand in line and purchase our tickets with a guided tour. Interestingly, the information given by this guide and the audioguide we'd listened to at the Arena in Nimes, France, was a slightly different. For example, one said that gladiators were primarily volunteers, who desired fame and glory, versus the other, who said most were prisoners... hm.. who is correct? No idea. In any case, the Colosseum was pretty spectacular. 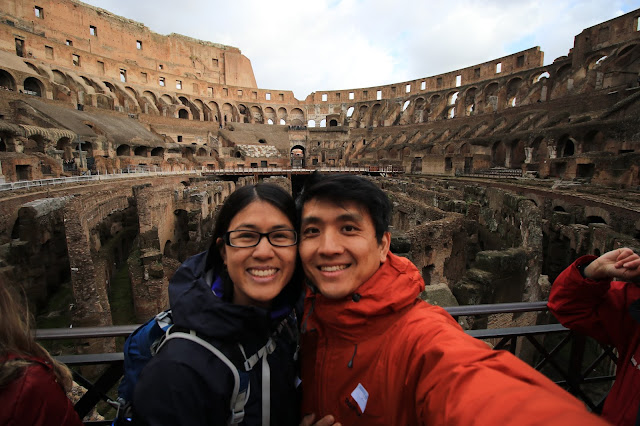 Our final stop was the Pantheon. Phil wasn't super impressed with it, but we later found out during the walking tour just exactly why the ceiling was and is such an architectural marvel. Apparently most domed ceilings or arches require a keystone to hold it all together at the top. The pantheon houses the largest unreinforced open centered dome. The trick being, the thickness of the dome near the base is much greater than that of the top. On top of that, the density of the concrete was also graded to be lighter and lighter until the top of the dome is both thinner and lighter than the bottom, thus able to hold itself up. Our guide told us that the math and physics behind this needed to be so precise, that even to this day, it would be very difficult to replicate.

Our second day in Rome, started out incredibly rainy. We'd planned to go see the Roman Forum, but seeing as it was all outdoors, we stopped by the Museo Storico della Liberazione di Roma, a museum dedicated to the German occupation of Rome in WWII. A fascinationg but sad place, it was the actual location of the prison used by the SS, and still has the cells where the prisoners were kept along with preserved graffiti on its walls.

Afterwards, we ended up going to the Palatine Hill and the Roman Forum after all as the weather finally improved. Even though I'd been there before, I always feel a sense of awe of how amazing this society must have been, and how shocked a person from that time period would be if they could ever see the state it's in now.

Lastly, we went on our free walking tour. Our guide, Nick, a classical history major was excellent, and all the information became even more interesting when we combined it with all the history we'd learned on previous tours about the Romans in France and Spain. We stopped through some interesting places included the Piazza del Popolo, the grave of Augustus Ceaser, the Pantheon, a gelato stop, the Piazza Navona, the Castle Sant'Angelo. We finished the night off at St. Peter's Square in the Vatican just to check it out and then headed home.


While in Rome, we made sure to go and try some pizza, paninis, and ever more gelato. One famous place, Giolitti's, is considered the oldest gelatoria in Rome, and we found it by happy accident while wandering the streets one evening. Remember, any time is a good time for gelato!


Three nights and 2 days was definitely too short to spend in Romee.. but we had a schedule to make, so onwards we had to go!


Check out our video version below: