- April 02, 2018
Matera was a town that wasn't even on our radars, until I stumbled upon a few articles about it when we were seeing what there was to do in Southern Italy. It seems it's not the most popular place for foreign tourists, though it's been popular with Italian tourists for a while now. The history of this town was fascinating, and it made me want to go and see this cave city for myself.

While historically a wealthy and populated city, Matera eventually fell into oblivion, creating an entire population that lived in poverty with poor sanitation, overcrowding and zero separation between humans and livestock. Not even 70 years ago, this town was finally relocated into new government housing after a memoir was published by the traveling author, Carlo Levi, disparaging the forlorn state of the city. Since then, the "Sassi" (caves) were abandoned, and now more recently, revived once again. Nowadays, they are home to many hotels and restaurants catering to tourists, as well as houses again, but with abundantly improved facilities.

We were surprised by how beautiful the city was and how normal the city felt as many of the cave areas are hidden behind stone walls and doors. A few were open to exploration in the old city, and many other undeveloped caves were accessible across the gorge. For a small fee in the old city, you can also explore one of the many churches that had been carved out of the rock, an exhibit of what life in a cave would have been like before the relocation at the Casa Grotta, or a historical multi-media presentation on the history of Matera at Casa Noha.


We had a great time exploring both the old city and the caves across the gorge. We also made it in time for a spectacular sunset view from the other side of the gorge looking towards Matera.


While the city looks a bit normal from the outside with stone facades, doors and windows, the insides are carved directly out of the stone of the cliffs. 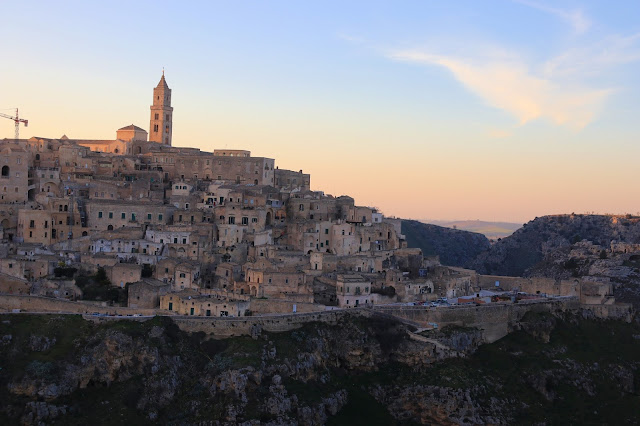 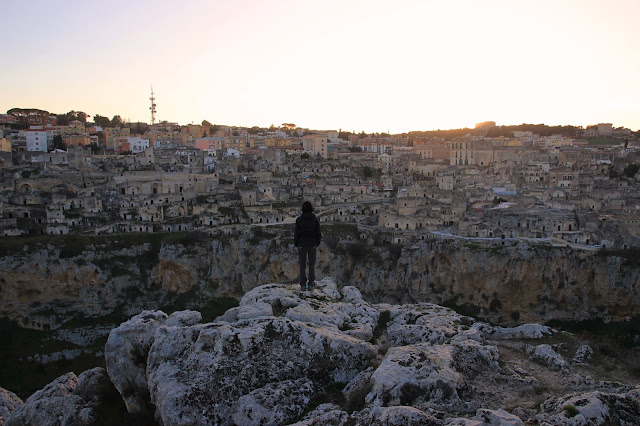 Overall, we thoroughly enjoyed our day in Matera, soaking up the history, seeing how different life has changed, and witnessing the results of a revival of this city.

Alberobello was a quick half day trip on our way to Brindisi where we'd board our ferry for Greece. It was another UNESCO heritage site for the unique architecture of the Trulli (cone) houses. Apparently the experts are still unsure as to why exactly this type of building came to be, but the popular theory is that the building style came out of a desire to avoid paying taxes. When the taxman would come around, these Trulli houses, which don't use any mortar or binding agent between the stones, could be quickly dismantled, hence giving the taxman nothing to tax. Regardless, they're pretty interesting looking structures, and currently house many rentable living spaces and souvenir shops.